A Remedy for the Unaligned Multispectral Imagery Blues

The following contains two tutorials on how to register (align) multispectral imagery bands into a single composite raster image. This would be suitable for those whom have come across the issue of having captured a single image using a multispectral sensor and now are forced to find a technique to register the images manually. 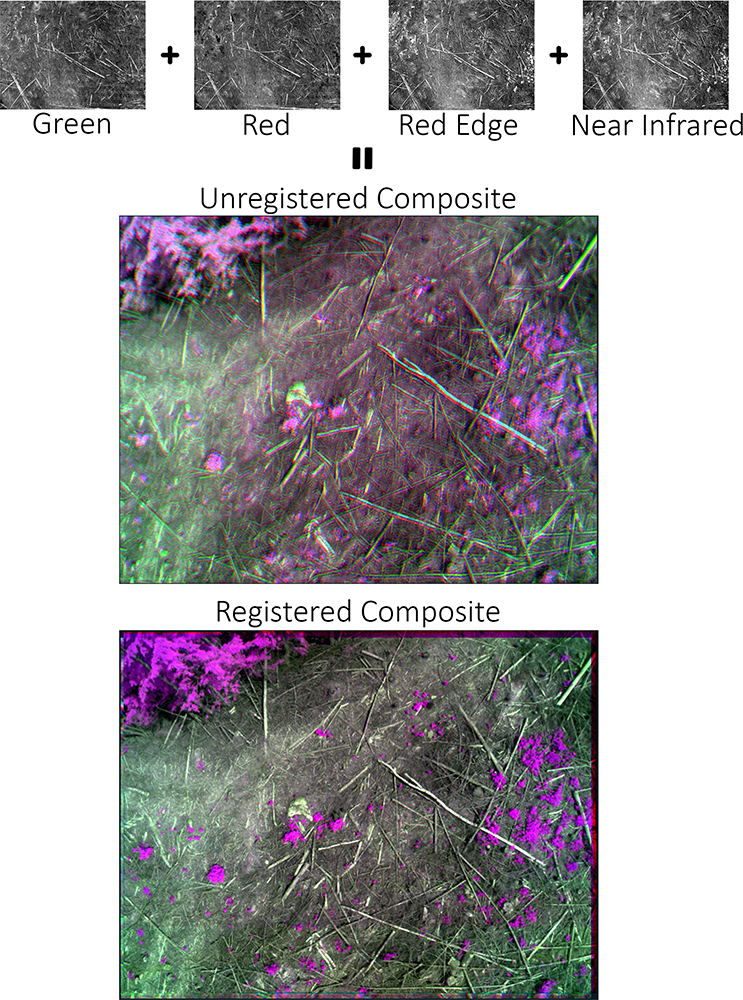 But first, like every good internet recipe, comes the background story. A current project being completed at the SGRC is the Fibre Inventory and Biomass Utilization Enhancement; where one of the objectives is to identify merchantable leftover timber within a forestry cut block. This will require aerial imagery captured from a drone or remotely piloted aircraft system (RPAS) (formally known as unmanned aerial vehicles or UAVs). Specific project requirements suggest that we need high resolution imagery with less than 10cm spatial resolution, as well as multispectral characteristics in order to count leftover wood residuals. For this we have used the DJI Mavic Pro paired with the Parrot Sequoia multispectral sensor. As you can see in the image to the right, there are four sensors with 1.2MP resolution; Green (550nm), Red (660nm), Red Edge (735nm), and NIR (790nm) as well as a 16MP RGB (400-700nm) sensor. The goal is to acquire a single stacked image composed of the four band images. Most drone missions will cover a large area at once and the typical workflow of processing the multispectral imagery is to create an ortho-rectified mosaic, which is done semi-automatically through a georeferencing/triangulation process, which in turn would register (or align) the four band images. Unfortunately sometimes there is no possibility to fly a drone to cover a large area due to elevation changes, trees, etc. In this case, a single image would be taken from about 30 metres directly above the survey plot by each sensor on the drone. However, due to only capturing a single image, this introduces an issue where the four bands cannot be registered automatically through imagery processing software. Although the images are taken at the exact same time, you can see by the orientation of the sensors, that the resulting images could not possibly be of the exact same scene. You cannot simply stack the four images on top of one another, as rotational translations around the X, Y, and Z positions are needed; the result would be an extremely unfocused, unusable image. This brings the challenge of stacking four images into one single multiband image.

Lucky for us, we have been rather well trained during the ADGIS program here at Selkirk College to overcome logistical GIS challenges. When one workflow doesn't work, find or create another. Sometimes coming up with solutions to software related issues can be easy, sometimes not so much. Being a COOP student at the SGRC not only provides the space, tools and time to assist in researching solutions, but also provides a physical platform where students and researchers can brainstorm ideas together.

Below are two methods that give similar results, both with their own pros and cons. The first one, I created and requires an ArcGIS Pro licence and some patience. The second one, I found online and requires some Python/Command Line abilities, however is FREE and relatively fast.

Multispectral images can be referenced or aligned to one another in ArcGIS Pro, piggy backing off the georeference function. This is quite tedious and repetitive; if you have multiple sets of images to align, and you know how to use Python/Command Line, I suggest skipping to Method 2.

1. Load all four separate images into ArcGIS Pro that contain the corresponding Green, Red, Red Edge and NIR bands from the image set.

2. Highlight in the Table of Contents (TOC) a single band image to reference (this will be the source image, the image that you want to reference to another image)

5. Press auto georeference, the source image (Green) will align to the target image (Red Edge) based on spectral signatures of 36 automatically selected control points. (Note: this can be done manually as well by selecting common visible control points between the two images, but can be extremely time consuming)

6. Save. This will either overwrite or save a new copy of the now referenced (to Red Edge) Green image.

7. Repeat steps 1-6 for the other two band images ensuring the target image (Red Edge) is used each time. (Note: Because you are using one of the bands as the target image, only 3 auto georeferences need to occur.)

Also Note: This process only references the images to one another for stacking purposes, once combined into a multiband composite image they can be further georeferenced to actual ground coordinates. 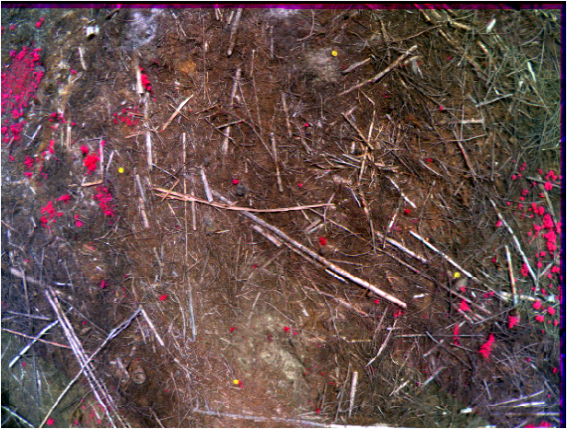 8. Once the Green, Red, and NIR band images have been referenced to the source image (Red Edge), we can now select the Composite Bands Geoprocessing Tool, which will stack up to all four aligned band images and create a multiband raster. This raster can now be used in remote sensing applications to solve complex problems! Shown to the right is a common false colour composite RGB image where NIR is displayed as Red, Red is displayed as Green and Green is displayed as Blue, but most importantly, the images are aligned!

This method is FAST and requires nothing more than an open source Python script and some package add-ons. This script can be run on a directory and it will automatically create 3 band false color RGB composite images which can be used directly for remote sensing applications. (Note: This is only for images created with the Parrot Sequoia, if you've used another sensor, this method may not work.)

The Sequoia Stacking script and directions can be found here. Below is the directions from Tyler Pubben's[ ]{.ul}github page, along with some added text from me to help you along the way.

1. Install your preferred Python 3.x distribution. You need the following libraries: a. OpenCV3.4 with the contrib packages for SIFT (keep in mind, SIFT is a patented algorithm. Please do not place this into a commercial software package. b. numpy

One way of installing package add-ons is using pip install

2. Copy all of the Parrot Sequoia individual band images into a single folder.

3. Create an output folder where you want your composite images to be saved.

4. Run the script - the way you do this varies based on OS and installation. If you don't know how to run a Python script from terminal I suggest you look at an introductory Python course.

5. When the script prompts you for which band you want in each channel keep in mind that channel 1 == blue, channel 2 == green and channel 3 == red in the false color composite.

Note: This is backwards from most remote sensing software, usually it is RGB not BGR

6. Enter the full path to the output and input folders. eg. "C:\Users<username>\inputFolder" the quotes are not necessary. 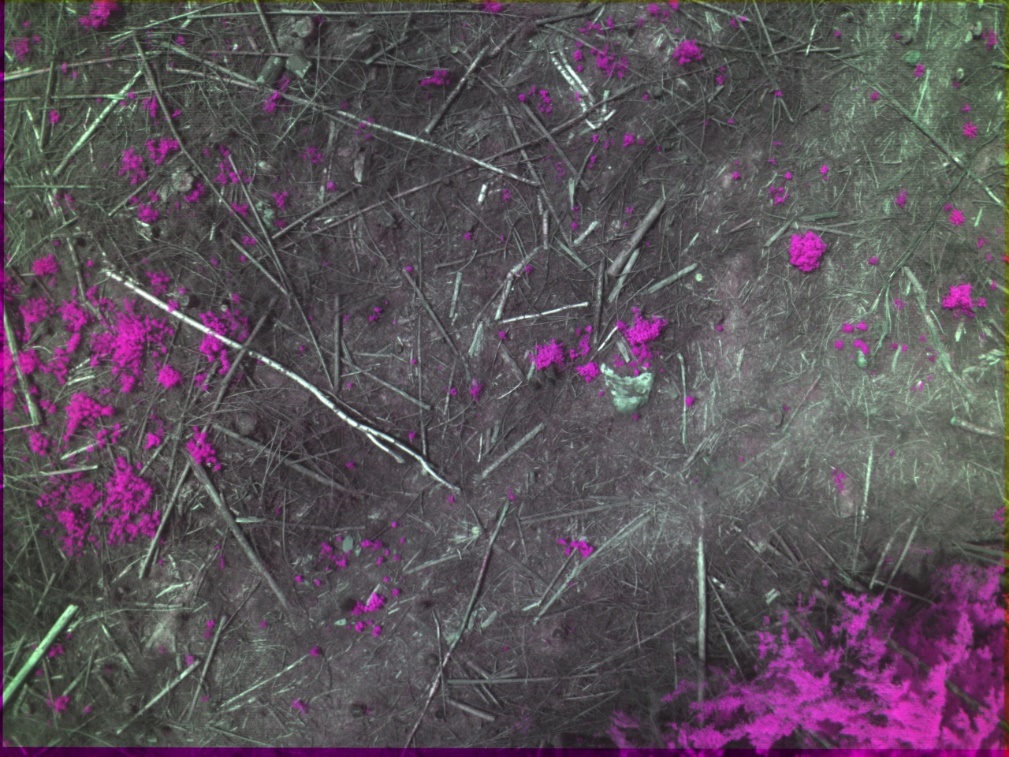 After the script runs the image will be deposited in the output folder.