Most people are familiar with the expression, “Can’t see the forest for the trees.” I would best be described in the reverse, “Can’t see the trees for the forest.” I’m very good at thinking in terms of the general, the overview, the big picture. Not that I’m especially lacking in attention to detail, but I typically find the sum much more interesting than its parts. Thus, my first thesis research question went something like, “What is special about landscapes where people are willing to expend huge effort in order to experience something meaningful?” The unanimous response I received after every enthusiastic delivery of this clearly exciting idea was, “So, ... what are you actually going to map?”

Forward to a forest walk along a Rossland trail with writer and Selkirk instructor, Almeda Glenn Miller – who maintains a special place in her creative soul for maps and mapmaking – and a conversation about the many layers of narrative surrounding mountain culture. Mountains are both locally and globally symbolic, while retaining common physical features that are easily recognized (and mapped). The inherent meaning present in the tension between their massive presence and ethereal nature was the immaterial concept my thesis project thereafter set out to quantify, through the application of GIS.

Distance Reading, an experimental methodology developed by Franco Moretti, was adapted as my guide for linking symbolic, cultural elements to physical locations. A global study area was used, as identifying any correlation among universal elements was central to the project. Features including mountain elevation, prominence, aspect, slope, and distance to the nearest road were evaluated in comparison to the assigned categories of deity, monastery, ritual, sublime, and temple. Exploratory data analyses were conducted using the statistics program R in order to highlight existing patterns and trends.

Initial findings revealed moderate correlations (p-values from .08 to .11) between elevation, prominence, and slope and mountain classification. Features which did not produce significant p-values regarding a specific assigned category – aspect and distance to the nearest road – were nonetheless considered symbolically important due to their reflection of general trends.

The potential demonstrated in previous research, and by this project, confirm the adaptability of GIS in addressing spatial questions that originate from a variety of disciplines, as well as facilitating interdisciplinary collaboration. Its data structuring and visualization capabilities provide means through which the intangible in arts and culture may be represented. 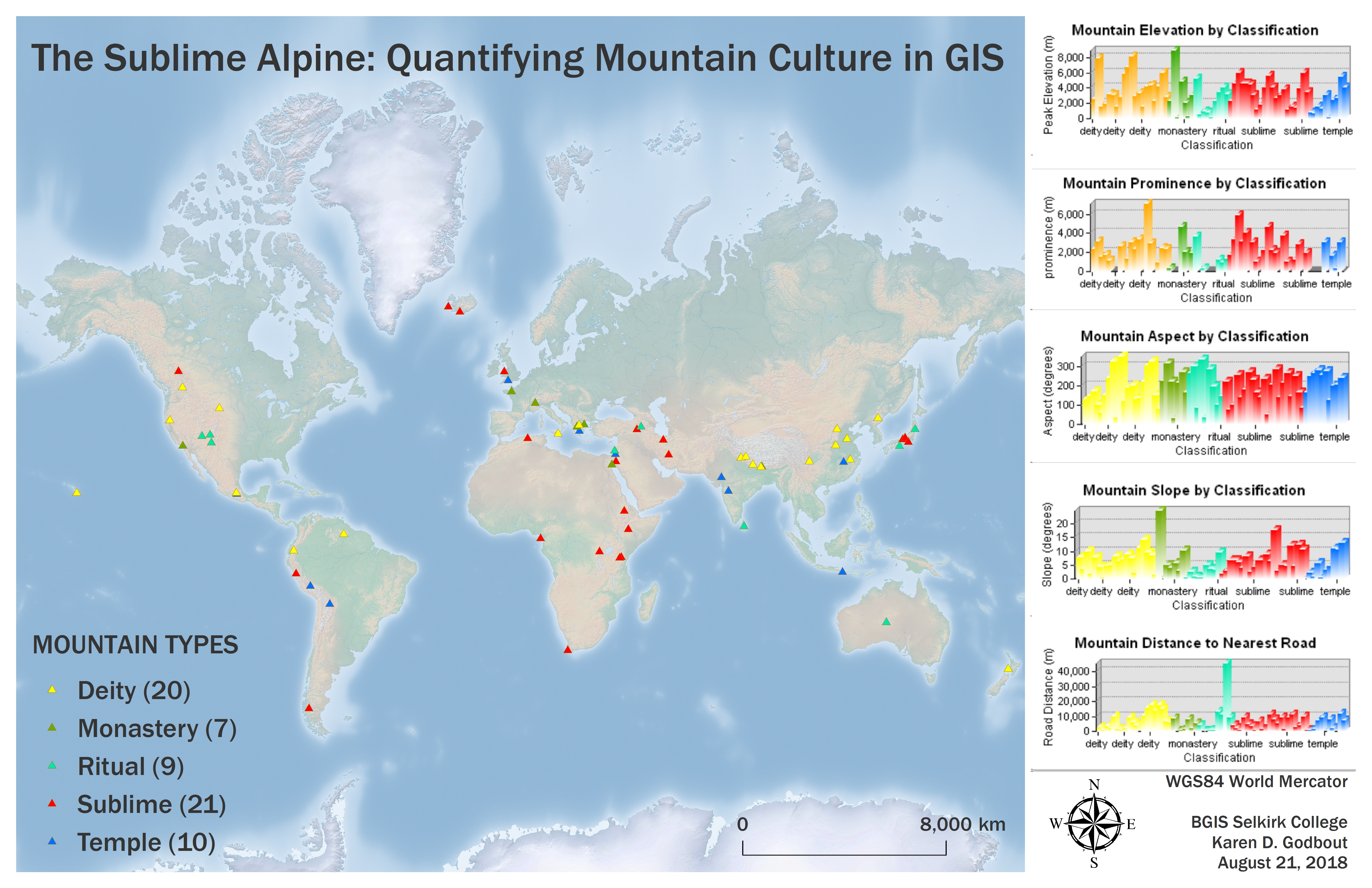